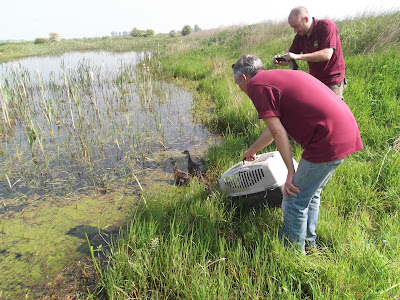 Here's Fallon Mahon of N.E. with the first lot of orphaned Mallard ducklings being released at North Duffiled NNR.
They came here in ones and twos and were reared on together.
They so love to be out in a natural space and dabbled and swam in the pond. Within 30 minutes they were hiding and behaving just as wild ducks do, wonderful. 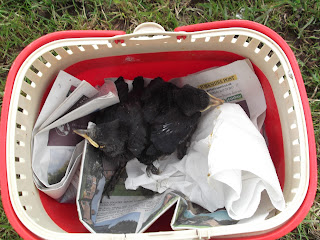 These 2 rescued juvenile Jackdaws were taken in after their nest in an old ash tree was cut back illegally. I cared for them for a couple of days and then they went to be fostered at Wheldrake. A favourite nest site for Jackdaws had 2 youngsters the same age. So Craig Ralston of N.E. suggested they all be reared together. 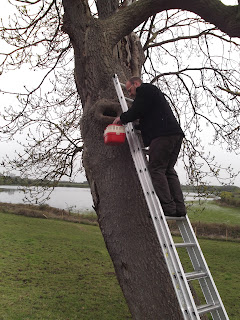 Here's Craig introducing the 2 newcomers to their new home.
Over a week has gone by and all 4 are looking well and thriving.
The N.Y.Police are looking into the reasons they were removed from their nest.
Posted by jean thorpe at 05:15 No comments: 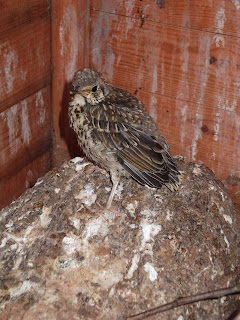 This young Mistle Thrush is out in the shed , just beginning to feed itself. Flight feathers still growing , won't be long before its off. It has a blackbird friend and they are both learning to fly and wild up in a bigger space. They need some time and some warmth to get going properly. 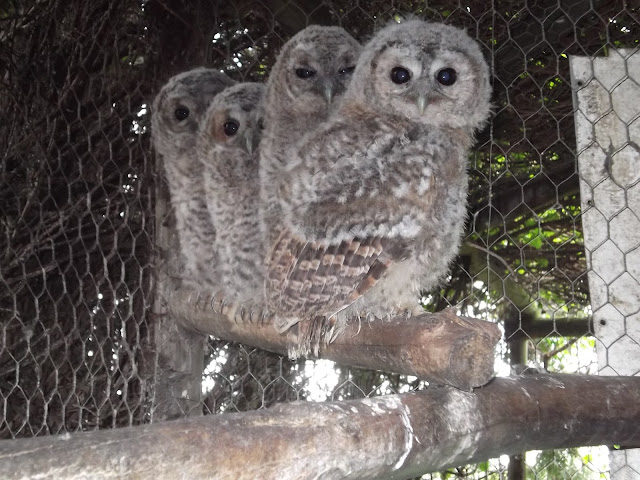 4 young Tawnies are now out in the avairy.They're not good flyers yet but getting there.
I had an early one which was ringed and released earlier this week. 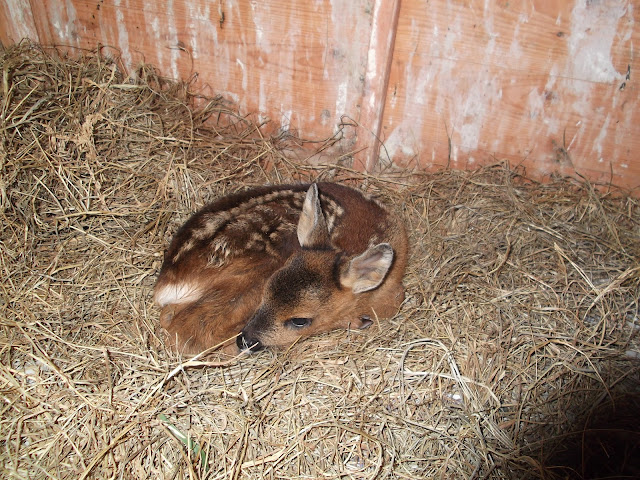 This days old roe deer fawn was picked up by a Staffie dog walker who boasted to his neighbours he'd chased the mother off. He left this nervous youngster in his house with the dog whilst he went off to do a days work. The RSPCA were called and waited and waited to try and recover this wild mammal. Eventually the dog owner sent his keys by taxi for the RSPCA ACO to help this enforced orphan. He came here shocked and flat . He never recovered and sadly after lots of careful TLC died quietly under a heat lamp.Roe deer are very nervous creatures and give birth in meadows and woodland at this time of year. They leave their newborns in the long grass and keep coming back to feed them. After a few days the youngsters follow their mothers browsing the greenery around them. These newborn wild deer must not be touched or moved  by humans or their dogs as the mother deer may not continue with their care. So please leave them alone , their mothers will be close by and will continue to look after them if they are left alone.
Posted by jean thorpe at 03:21 No comments: 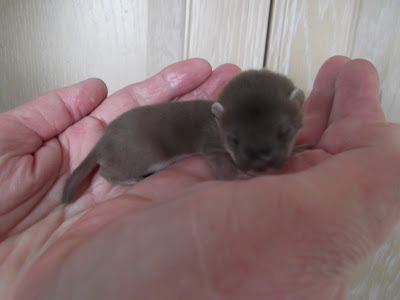 Juvenile time of year with lots of young wildlife in to care for.
This little stoat came in with a nicked ear, still blind and needing warmth and lots of food.
She's doing well. 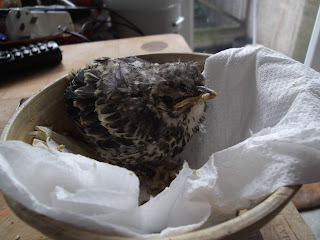 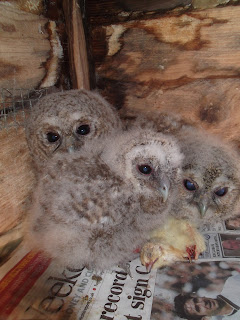 Young Tawny Owls come out to branch from their nests.
The parent birds are usually about but walkers pick them up and bring them in . They should rear well but would be far better off parent reared . 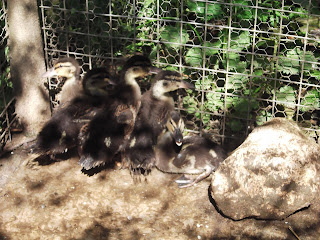 Mallard ducklings enjoying the sunshine. They will be ringed and released on the Lower Derwent Valley soon.
Posted by jean thorpe at 04:42 No comments: 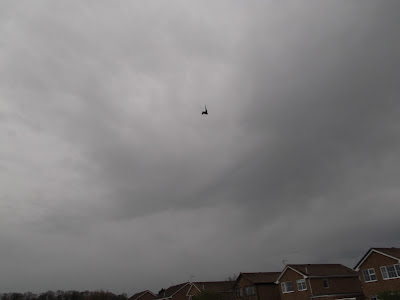 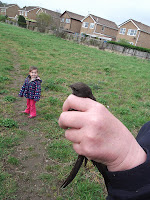 A long distance summer visitor was found floored last night by a dog walker close to home. This adult swift was wet through and being closely watched by the local cat population. The bird arrived here this morning , weighing 47g.It had dried out overnight and was tube fed with critical care.It flitted across the kitchen and looked bright and alert.

So off into the back field for release. Swifts cannot take off from the ground , their little legs are too short for them to gain momentum. Swifts have to be enthusiastically thrown into the air to return them to the element they are most at home in. So it was with this one , off it went wide and high , spectacular !