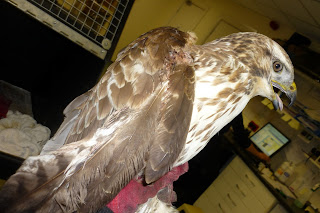 This big beautiful blonde Buzzard was found downed near a stream in Farndale, North Yorkshire.
She had an injured wing ,the bones splintered and sticking through the skin.
She was examined , x rayed and put to sleep at Battleflatts vets at Stamford Bridge, York. 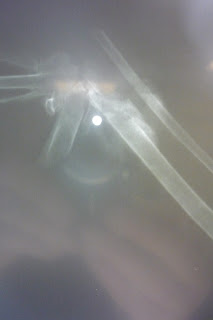 The x ray clearly shows a shotgun pellet did the damage and this fine protected bird of prey was illegally taken out by a local Farndale shooter.
The North Yorkshire Police and the RSPB were informed and investigations are on going.
The RSPB have put up a £1.0000 reward, I fear their money will be safe as these things are extremely difficult to bottom. We all think our own thoughts and know in all probability would did this, but proving it is another matter.
Shame on them.
I had another Buzzard downed found between Pickering and Malton. She was weak and suffering from multiple abcesses , her lungs/air sacs were full of pus and she was put to sleep.
Looking at her flight feathers were the tell signs of shotgun pellet notches through the barbs
of her feathers, if you look for bird of prey persecution you find it . 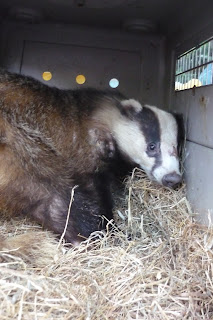 A big old boar badger was found in the back yard of a house in Kirbymoorside. RSPCA Ins Geoff Edmond was called out to collect him and he was examined by Andy Forsyth at Battleflatts vets at Strensall. He needed antibiotics for fight wounds and was brought here to recover. He ate well, bounced about on boxing and was taken back home. Chris Peacock who knows the setts in the area came with me on the release. We went mid way between 3 setts not knowing which one was home for him. He didn't need to go far and shot off , he knew exactly where he was going , straight to ground and home.
I've been out badger watching and saw 3 grand fat badger cubs carefully watched by their Mum. 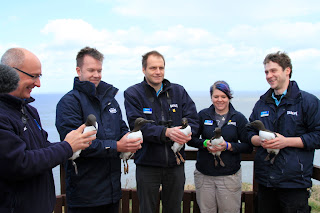 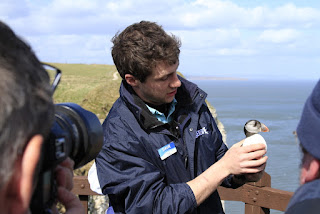 The tired sea birds being cared for by Tod German at Scarboro Sea Life Centre were successfully released at Bempton Cliffs. Well done to Tod for his care and determination to get it right for these lovely birds.
Posted by jean thorpe at 03:22 No comments: