Sparrowhawks, Kestrel and a Beautiful Badger. 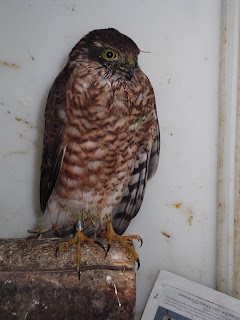 Its been a Sparrowhawk fortnight, I've had 6 birds in.
1 had to be put to sleep, as she had a badly smashed wing but the rest all made it back.
This little male only weighed just over 100g. He was found in York unable to fly off .
He was a this years bird, as were the majority of the others ,they just hadn't got the hang of their independance.

Sparrowhawks can be tricky, they are so nervous and shy. I tube feed with critical care as soon as they arrive and leave them to settle in an I.C.box They usually refuse to eat and have to be encouraged by tit bit feeding, trying not to stress them too much at the same time.All the birds were b.t.o. rung before release.
Its grand to see them go back. 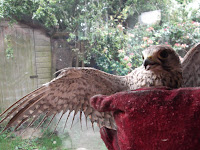 A Kestrel was found in West Yorkshire with badly melted feathers, very strange and a mystery as to how it happened. He was brought here by the RSPCA. He was in good bodily condition and a flyer , just. He had no trouble with his breathing and his skin was not touched.
Birds moult thier feathers slowly so they can continue flying and feeding. This bird would not be able to hover as Kestrels do to catch food.
I took him for Andy Forsyth the vet to examine.He would have to be kept in an avairy for months until new moulted feathers come through or given medication to encourage moulting. We're 3 weeks into a 5 week regime of daily medication. He has remained wild and daily tolerates the handling . Fingers crossed that he can go out with new feathers soon. 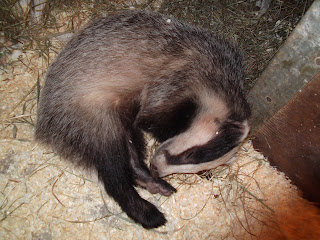 A young sow badger was found concussed on a grassy verge in Grosmont early one morning.
She was dopey but looked intact and was collected by the RSPCA and taken to Battleflatts vets for assessment.
She came here for some r+r and laid down in the pen sleepy and unaware of her surroundings.
She ate well from the start and moved about at ease with me in the pen which showed she was far from right.
2 weeks later she had improved enornmously and I rang the finder to ask about the area. This little badger nightly visited gardens for peanuts and was seen with her mother on many occasions.
They had missed her as her mother was calling alone to be fed. I arranged to take her back in the evening time to the garden which was yards from her accident.
She boxed well and we drove over the purple moors to Grosmont for her release.
The ladies that found and fed the badgers welcomed her back like an old friend.
She stepped daintily from the box and  knew exactly where she was, stepping over a low fence rail and away home. 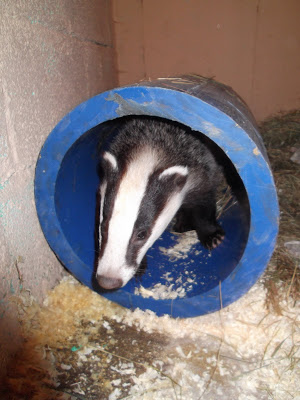