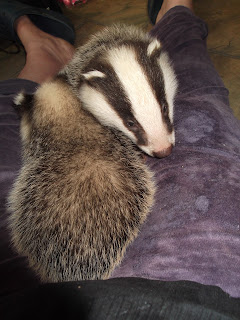 These 2 little sweeties were found running the road alone and lost, sow badgers do not leave their cubs to chance.
A lady taking her children to school near Robin Hoods Bay found them and picked them up on her way back.
The RSPCA collected them and brought them here.
They were alive with fleas and lice but front line soon sorts that out. I tried bottle feeding them but they were too big for that.
I managed to syringe feed them and left them to rest in a warm pen with a straw filled hidey hole for the night.
They are about 8-10 weeks old, brother and sister and in wonderful condition, but where was there Mum ?

It is possible to put cubs back if you know for definite where they come from and can wait at a distance to make sure. This is a job for the more experienced badger worker. 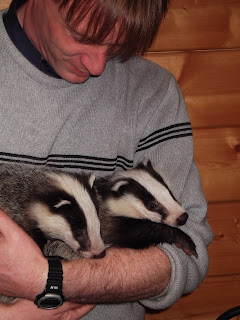 These 2 were very mobile and could have come a distance from their home.
The protocol with rearing wild badger cubs is to tb test them 3 times before they are released in the autumn. The first test is done before they move and are introduced to other orphaned cubs. It is a sin to keep them alone , they are social creatures and need to be reared together.
I took them for tb blood testing to Mike Jones , Battleflatts Vets , Stamford Bridge, York. He's used to dealing with badgers with me and has shown great kindness over the years having to deal with persecution post mortems as well as the more pleasurable task of helping with cubs.

Badger cubs like Mike , they relax and trust him.
They ate well and settled down in the pen next to the big badgers which have now been released.
It was the Badger Trust Agm at the weekend and I took the cubs with me to Staffordshire . Secret World in Somerset are nationally known for badger rehabilitation and Pauline Kidner is the best person I know to care for orphaned cubs.They were much admired at the meeting where I kept their appearances to a minimum.  So they travelled down to Somerset after the meeting with Andy Parr, Secret Worlds release manager. Pauline's e mailed me to say they have settled well, and have eaten straight away .............they are Yorkshire badgers after all ! 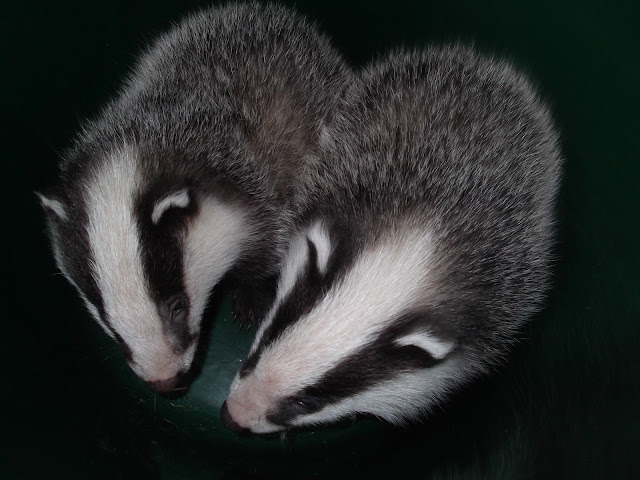 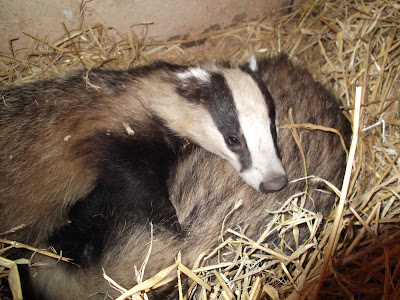 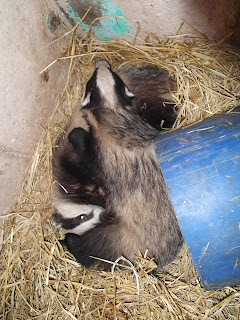 This pair of badgers were found 100yds apart both in snares on a fence line, over looking the sea near Scarboro'.The boar had the snare round the neck and the sow was caught around the chest.

Mike Moor of the North Riding Badger Group attended and managed with great care to release and box both badgers working alone. He took them both to the vets where the instruments of torture were removed under anaesthetic. 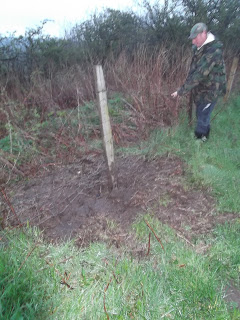 This was the site were the boar was caught, he'd tried his best to get away and chewed up the ground desperate for release.
It is illegal to set a snare to catch a badger so North Yorkshire Police WLO P.C. Graham Bilton and RSPCA Insp Geoff Edmond are investigating.
The badgers came here for treatment and I waited to see if the snare wounds opened up. I managed to inject them every other day with antibiotics and they settled and ate well, taking comfort from one an other in rehab.
After 8 days the dreaded pressure necrosis wasn't too bad and they were ready for release.
I took them back to the release site and met up with Anne and Mike Moor, the family that found them and Geoff Edmond.
It was raining hard , badgers like the rain , more worms to eat. 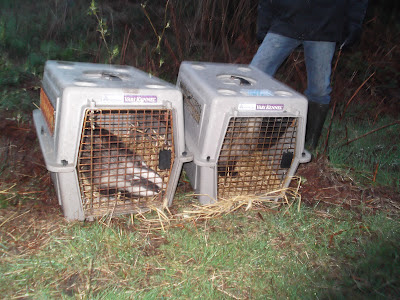 Here they are lined up and raring to go.
The sett was 80/100 yds away on a steep bank below the snare line where they were caught.
As you can see by the photograph they knew exactly where they were and were keen to go home.
They both left the boxes immediately, moved well and shot off down the slope for home.
Lovely to see them go but the thought of those dreaded snares damaging our wildlife rankles me no end.
Posted by jean thorpe at 03:03 No comments: 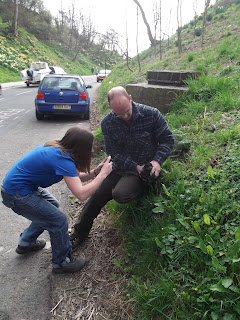 An unusual and rarely seen sea duck , a Common Scoter, was found sulking in a garden at Bransholme, Hull this week.
The bird a last years female was migrating overland and heading to quiet breeding grounds.  The reason for her coming down in such an unlikely spot will never be known.
She spent a few hours here bobbing on the swan pond.
I rang Craig Ralston for advice and he said 2 Velvet Scoters were presently on the sea in Filey Bay and it would be a good spot to release this sea diving duck.

Craig and Lucy taking a close up before ringing and release at Filey. 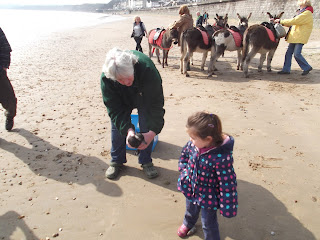 About to go, Bella was more interested in the donkeys ! 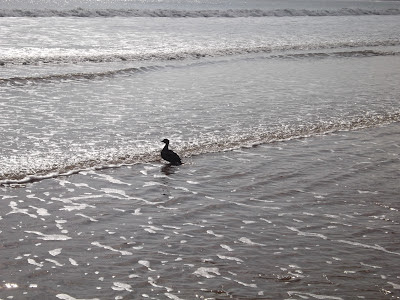 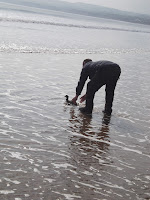 Craig releasing the Common Scoter into the surf. She flew/ paddled with ease, ducking under the breakers and headed off to the calm water beyond. Mega !
Thanks to Craig once again and Lucy got a ringing tick !
Bella on a donkey, we went on for fish and chips and a go on the swings, so all in all we all had a good day. 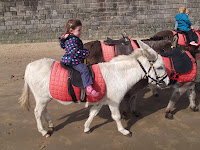