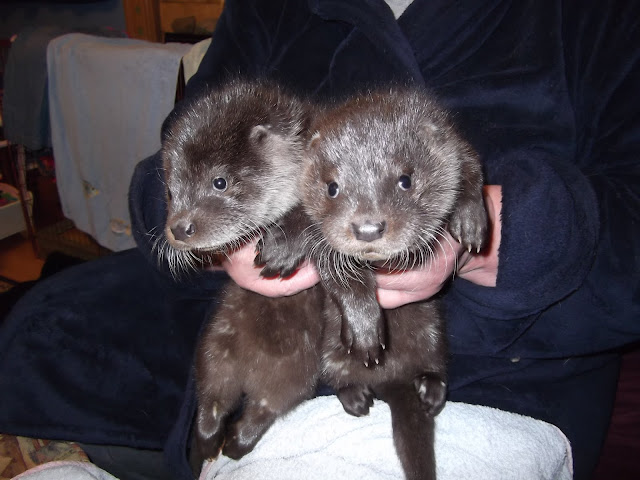 <
I got a phone call from a worried householder in the hamlet of Fryton. They had been seeing to their guinea pigs at teatime and there in the garden was a young otter cub. They live close to a flooded stream and this little dog otter was wet , cold and all alone. I quickly got there and put the bedraggled cub in my coat to warm him up. I asked the concerned locals to look out for siblings of this lost cub. Otters can have 3 -4 cubs and they too could be in trouble. I came home and manged to get some warm re hydration fluid into him and left him to rest in a warm box.  I rang  Roger and Carol Heap of the Chestnut Centre in Derbyshire for current advice on care of young otters. I've cared for cubs before but wanted to talk it through with them and we decided the cub should go to them the next day. 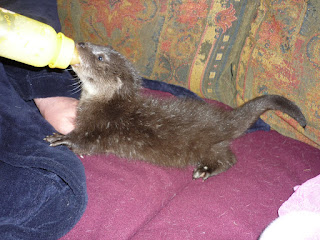 They had a cub from Wales in and a pair are better reared together. He cuddled straight up to the Welsh cub and we were all happy the 2 were together.
On arriving home a message on the phone told me another cub had been found in Slingsby and was being cared for by Peter Smithson , the wildlife camera man. I went straight out and Peter had found her in a shed just 2 fields away from the first cub. He kept her warm and quiet.
I took her for the once over by Mike Jones the vet as I had the first cub and he gave her antibiotics. 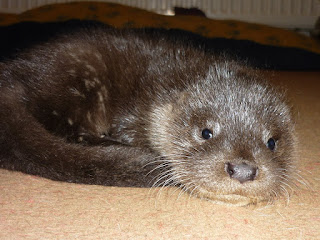 She took to a bottle well and was soon full of warm fluids and sleeping in the warm box.
The third cub was found that night in the next door garden to the first cub. The wonderful householders of Fryton had been out at frequent intervals listening for the high pitched whistling of lost and lonely otter cubs and their determination had found this last survivor. He snuggled into his sister here after drinking. I was up during the night to feed them. The next day they were all reunited in Derbyshire. No mother otter would have abandoned 3calling youngsters so she must have been killed we think.
They have all gone down to The New Forest Wildlife Park where Ed Heap and his wonderful staff will take great care of them. It takes at least a year to rehab otter cubs, they live with their mothers for that long so they can go on to lead a wildlife in 2014. They rear them wild and hands off .
They were very beautiful and amazing to have in the hand. What a start to 2013, Happy New Year !
Posted by jean thorpe at 07:34 2 comments: