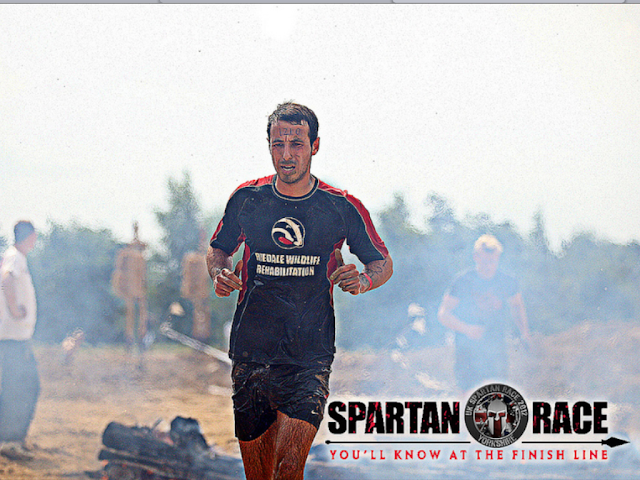 Here's my son Joe flying the flag for Ryedale Rehab at the Spartan Race nr Ripon. He did a real good time and was in the top 30 of over a 1,000 competitors. 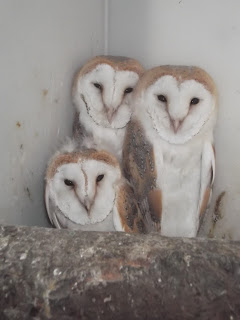 These 3 young Barn Owls were taken into care after being found thin and poor in a local nestbox. The first one was found flip flopping round a garden. She had left the nestbox too early and wasn't a good flyer. A barn owl nest box was located in the gable end of a garage. I manged to find a local builder who likes barn owls to come out to have a look in.
The householders were away on holiday and thier neighbour was watering the garden and found this weak chick.
We hoped the nest box had an inspection hatch sadly it didn't so Andy had to unscrew the back board of the box whilst dangling on the rafters high up in the roof space.
Once inside 2 more young birds were found, one very weak. 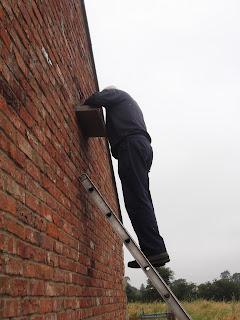 I brought them home ,rehydrated them and left to rest with food in a box. They ate very very well and must have been extremely hungry.

Andy up the ladder, rather him than me !

The following day the fourth member of the family turned up in the same garden, perching low under some stone steps.

All 4 are fairing well and have been BTO rung.

Within the next week they will go back to thier nesting home.
I'll grill them in for a few days , feeding daily.

Then the grill can come off and the birds will be free to come and go. Young Barn Owls tend to roost back in thier safe nest box homes so we will be able to continue to feed, giving them a soft release. 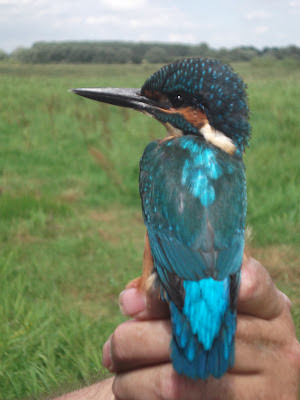 I'm still training to BTO ring the birds I get here in rehab. I'm lucky enough to ring with The Lower Derwent Valley , Huddleston and Jackson ringing group. I have ringed some spectacular birds, of which this young male Kingfisher was one.

He was in the passerine ringing nets at Wheldrake early one sunny morning.
A stunning male and so good to know they are about again after the long hard winter previously .